This article appeared in Icon Magazine: The Countryside Issue, #135, September 2014. 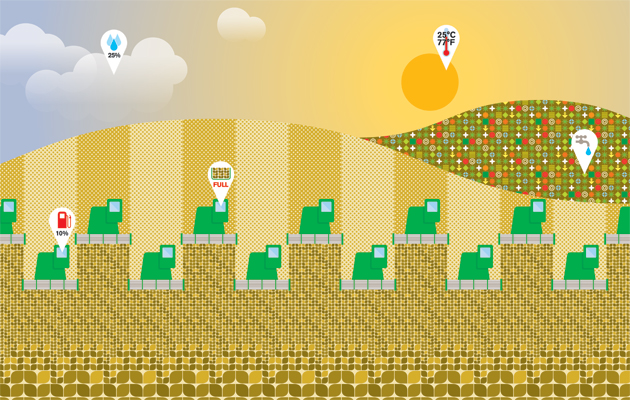 Illustration by Stuart Daly for Icon.

Farmland is becoming digitised, with the giants of global agribusiness developing combine harvesters that drive themselves and drones that monitor the water content of crops. Humans, meanwhile, continue their retreat from the land

Welcome to America’s largest factory,” says the bioethicist as we sit down to Aunt Maude’s special, tri-tip steaks that, even in the “bistro” starter size, overwhelm our plates. “This is the nation’s most industrialised state. Every inch, a living factory.”

Iowa: the American heartland, state of the wild prairie rose and the eastern goldfinch. In summer, the male birds grow bright yellow plumage while the females remain dull; both have conical beaks adapted to remove seeds from seed heads.

The cornfields of Iowa, these vast manmade biological production lines, are a perfect habitat for granivore birds like the eastern goldfinch. “Fields of Opportunities: the people of Iowa welcome you” read the signs as you drive into the state.

But in 2010, the state’s top export was tractors: $745 million worth of them. Farm machinery is changing rapidly. My parents have a tractor – a red, rusty monster. As a child I would climb up into the driving seat.

The glass was gone from the windows. It had no doors, a cracked PVC seat, and just a few tantalising controls: ignition, key temptingly inserted, a gear lever and a steering wheel. What more could you need to be a real farmer?

At Iowa State University, the Virtual Reality Applications Center (VRAC) in the Human Computer Interaction department is working with John Deere, one of the largest agricultural machinery companies in the world to design the autopilot simulators for state-of-the-art combine harvesters.

These are machines that sell for $300,000–400,000, have wifi, GPS, and soon may not need their integrated fridge. The driver will be eating his lunch in the farmhouse in front of a bank of screens.

My VRAC tour starts out not on the farm, but in a military virtual-reality simulator where 24 4K projectors and a room full of computers remodel an aircraft carrier around my groggy sea legs. While I stumble around a 10ft cube with projections on every surface, ducking as 100 million pixels of jet engines scream past me, a headset tracks my glances.

My guide takes me next to the “Veldt”. Bare concrete block walls, a cinema screen at one end and a reconfigurable village of plywood shacks, some with fake brick render and doors from the hardware shop. It’s a cross between a shanty town and the set of a school play, with cameras hanging like black fruit from the tracks above us.

This scaled-up experiment, called MIRAGE, allows training simulation to be integrated into a physical space. Insurgents charge out from the screen as soldiers tote replica guns, hide behind barriers and storm into the sheds. A taped-up patch on the white screen at knee height is a visible scar of virtual reality: a kicked-in door that existed only in the chips of the computer stacks down the hall. I open one of the doors tentatively.

This one is in the real world. Inside is the workstation of an assembly line. An office chair, a desk, a trolley of blue plastic trays each divided into nuts and bolts of different sizes. It’s a separate ergonomics workflow-tracking study for a jet engine manufacturer. I imagine the insurgents sorting nuts with improved productivity and healthier posture before the student soldiers burst in.

The combine harvester simulators are in the next building. A stuffed toy sits in the beige-covered seat, beige plastic controls all around it as it stares up at four huge plasma screens. Here, they’re working with farmers to improve the human-computer interaction. The farmers who harvest Iowa’s 30.8 million hectares of farmland with these kinds of machines are nowhere near a rusty tractor.

They’re sitting in their combine cabs, Post-It notes on the windscreen, laptop on the desk, phone in hand. They’re buying and selling corn futures, running their business in a dislocated digital world as they travel through the slow nature outside.

The simulator was shown off at the Iowa State Fair, but its real use has been in prototyping new systems. Stephen Gilbert, associate director of VRAC, explains the work they are doing to assess the interface for loading grain. In the simulation, the farmer is in the combine, his wife drives up and couples the grain tank alongside and he chooses from one of seven options to fill the tank as they travel along. Feedback has shown that the automated cornucopia that John Deere offers (more at the front, more at the back, more in the middle) may be too much. “The farmers just want the tank well filled.”

Something about the grain tank scenario strikes me. Where is everyone else? The human element is vanishing: even this strange techno-agrarian husband-and-wife relationship mediated through grain harvester filling grain tank may become obsolete. Instead, these massive industrialised farms could become “mom and pop” operations – two people with robotic farm machinery guided by satellites orbiting 20,000km above the Earth.

Gilbert describes the vision: the farmer sitting in the farmhouse waiting for the combine to bring the grain to him to check. The ideal human-computer interaction for the farming of the future is a handful of grain rolled between fingers indoors.

John Deere’s “Farm Forward” vision is a curiously dark corporate future where the central character is farming data rather than crops. He sets down his coffee at the homestead table while Minority Report style digital projections pop out. Although this sounds futuristic, the content of those projections is already available. This is the growing business of precision agriculture.

Back from Iowa, I’m learning about what it can do. Sitting in an organic cafe in London, I’m discussing drones that use infrared to monitor chlorophyll production and data streams transmitted by probes that monitor water content every 30 seconds.

Paul Cluver, the farmer with whom I’m eating banana hotcakes (no bistro portions here) can remotely water his vines and fruit trees from the data flowing to London from the tip of Africa through cables under the ocean. His farm is in the actual veldt, an hour from Cape Town. Here we are, in the real mirage, where a farmer’s workday includes controlling irrigation in Africa over breakfast in London, enabling him to spend the day selling the produce itself.

What does this digital agriculture mean for farmers? The romantic vision of the farmer, connected to the land and walking through his crop, kneeling down to examine a plant, is still played out in the Farm Forward dream.

Except here, backed by the soaring score and rumbling of incoming thunder, the farmer whips out a transparent smartphone that analyses the plant’s structure to near-cellular detail. He can control all the technology, but nature remains the unpredictable element in growing living machines. Disease, pests and the weather have yet to be controlled.

Illustration by Stuart Daly for Icon.